This is not a bug, but something that could be improved for next versions.

I just finished of doing my first import, a 120GB images folder, everything went fine, but the import process consumed all my physical memory and started to swap, some throtling could be done at least in terms of the memory limit.

Once the import was finished, the process continues consuming memory and swapping without limits,

Finally I had to restart the application to ensure that the post analysis of images will be done over physical memory and not over swap memory.

I imported to check the same folder on native photos app and it take a third party of the resources without memory swap.

A picture of the memory pressure 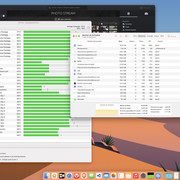 Thanks a lot
Best,
Daniel

I’ve just tested and the memory usage is definitely far too high there. Generally, it shouldn’t exceed the configured in-memory image cache size plus a gigabyte or so, unless it is doing some work. We’ll look into this for the next version.