With this version, we are introducing the first preview of the synchronization functionality. At this point, it allows you to have your library, or parts of it, stored on more than one disk (or NAS). Changes between these so called instances are kept in sync by Aspect.

The synchronization functionality, along with other device management, such as automatic imports, is found in the new device pane at the right side of the application window. To clone the library to an additional disk, simply click the (+) button at the top and a dialog that lets you choose the target location will appear. 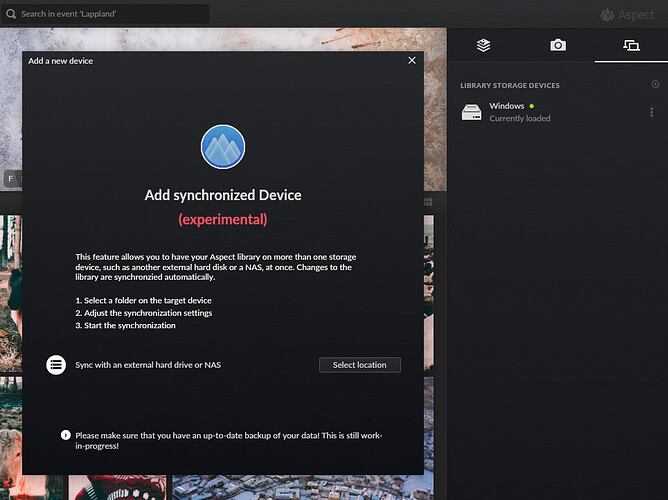 After you select the target location, you will be able to choose from a number of synchronization modes that determine which images will be available on the new library instance by default:

Once you hit “Start synchronization”, the matching files and the library catalog will be transferred to the new device. After the process is finished, the device will appear in the device pane. With this release you still have to trigger synchronizations between devices manually. Click on the three dots near your device and select “Synchronize now”. Future versions will do this automatically. 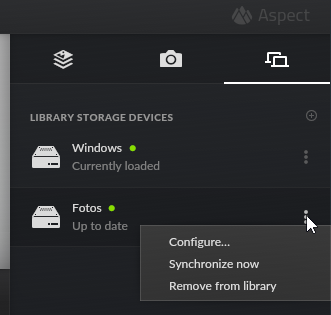 As usual, you will find the download links at the bottom of this post. Simply install over the existing installation to upgrade. This is the complete list of additions and bug fixes:

Feel free to leave any feedback here or in the bug reports sub forum. Thanks for helping to shape a new way of organizing photos!

Please remember: Even though the software is reasonably stable at this point, always make a backup of your data, or work with a copy of it, when using pre-release software.

If you don’t have a license, yet, simply register for a free beta license, or support us by buying an early-access version.